Jigging is a vigorous style of fishing that’s a workout for anglers and crew. Not all boats target Kona’s steep volcanic flanks, where bottom fish can be jigged nearly 500 feet down. Prepare to sweat. The bite can be heavy and the fish need to come up a long way. It’s productive, and it lands a unique bunch of fish. 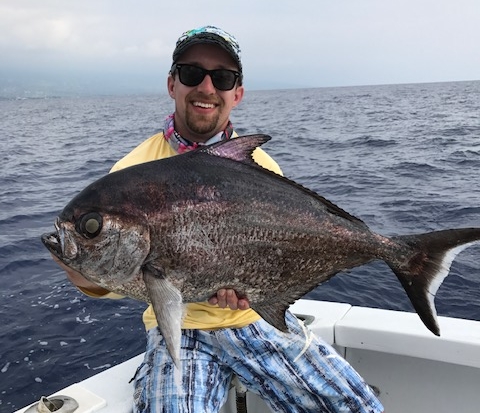 Monchong, run very deep. When cleaning these fish, it’s neat to see what their diet is. Some interesting creatures have been found inside the bellies of monchong, including lantern fish.

The Sea Strike had world famous angler Steve Wozniak out fishing in the spring. Steve is known for documenting the catching of 1,190 species of fish, and has fished in over 60 different countries. His current quest is to catch 200 World records and he is well on his way, capturing 4 of those records aboard the Sea Strike on his last trip.

On this particular trip aboard the Sea Strike, Steve captured a nice palani, pictured at left. He also caught a 140 lb silky shark and some Yellowfin tuna along with many strange bottom fish.

The last time the Sea Strike had Steve out for some Kona fishing, he caught several anthias, a species thought to be uncommon locally. He was even catching three at a time. The anthia pictured here adds to the number of different kinds of fish that ‘Species Man’ has caught to date.

Note: Anthias are hermaphrodites. All anthias are born female; if a dominant male perishes, the largest female of the group will often change into a male to take its place.

The opah, or moonfish, is often caught by longliners but rarely by recreational or commercial fishermen using rod and reel. Moonfish are prized trophies for deep-water anglers. Captain Dale Leverone had wanted to catch one for many years; since he saw his first ‘real’ opah at the fish market in Honolulu. Upon years of research and asking questions, he came to understand that this fish is mainly a longliner’s catch, at least in this neighborhood. One day, while commercial fishing alone off the Kona Coast, Captain Dale discovered something unique at the end of his line. A shark had also made the same discovery and followed the rare fish up to the boat, waiting for its most opportune moment for lunch. Upon seeing the opah, and then the shark, Dale found the strength in his excitement and competitive nature to get the big round slippery fish into the boat before the shark could get his first bite. This 138 lb. opah is the first recorded moonfish caught by rod and reel in Hawaii and is the current state record. 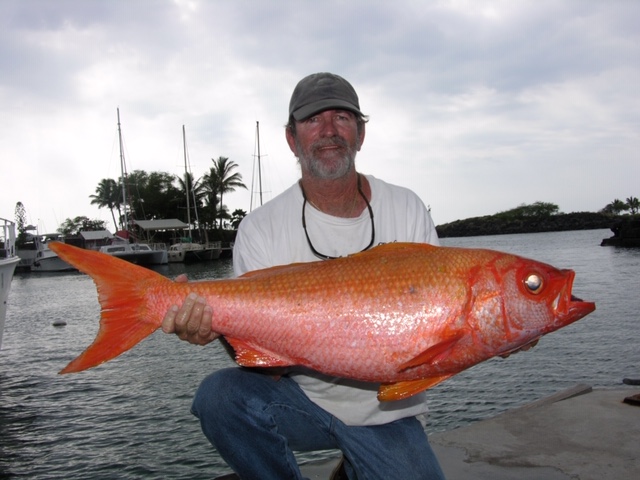 The Randall snapper is named after Dr. Jack Randall of the Bishop Museum, who is the official ichthyologist for Hawaii Fishing News’ state records. The Randall snapper, pictured above was a Hawaii state record caught by Captain Dale Leverone. oil fish aka butter fishThe current Hawaii state record for Randall’s snapper is 28 pounds – 8 oz., also caught by Captain Dale Leverone. The record was caught in 1,050 feet of water outside of Kona in 2009. 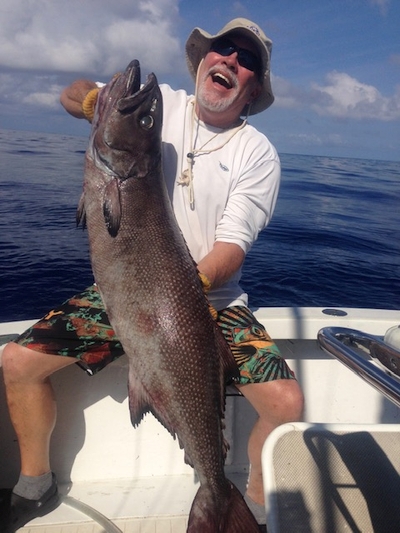 Oil fish are also commonly caught by longliners, but also occasionally caught on rod and reel. They are big and ugly with big, razor-sharp teeth. Oil fish put up a good fight and are good to eat. While this fish is deliciious, be careful. The oil in this fish works well on the digestive track, and too much might ruin your day.