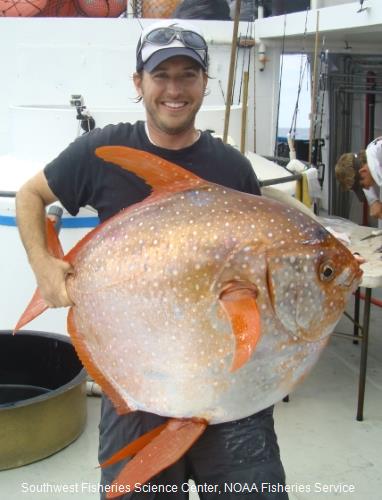 A Unique Fishing Find: The Phantom of the Opah

What is an opah? You may not have heard of this fish, even by its others names such as moonfish and sunfish. It’s an unbelievable looking fish, often just about as tall as it is long. It’s not very wide, though – it’s compressed almost like a disc.

Opah in Hawaii look exotic and usually sport very bright colors. One thing that makes opah stand out from other fish is that it’s one of a very short list of regionally endothermic fish. This means that it has some ability to regulate its own temperature. Its heart can warm its blood, which goes to the gills and warms the veins there. It also has layers of fat to insulate the heart, which makes it easier for the warm heart to heat blood as it travels through. This doesn’t exactly make the opah warm-blooded like mammals and birds, but it makes them different from other cold-blooded fish that have no ability to control their temperature internally.

For such a strange-looking, disc-like fish, you might not expect it to swim very fast. Yet opah do seem able to get to fairly high speeds. They may not be acrobatic like longer fish are, but they can be pretty strong.

Our own Captain Dale Leverone holds the Hawaii state record for opah caught on rod and reel when he brought in a beautiful 135 pounder. It was bright red, with yellow speckling – the fish looks unreal. In fact, that day he wasn’t targeting the opah, but he was excited when he brought it in. He’d admired the fish since childhood and had wanted to catch one since first arriving in Hawaii. Even though he had to contend with a hungry shark, Dale was able to haul the state record holder in.

Opah has become a very popular dish here in Hawaii. It’s regularly sold in fish markets, and restaurants here have created a number of fantastic dishes involving the fish. Opah is a unique and tasty catch. Opah in Hawaii can be hard to find, but once you do, they make for a catch unlike any other.