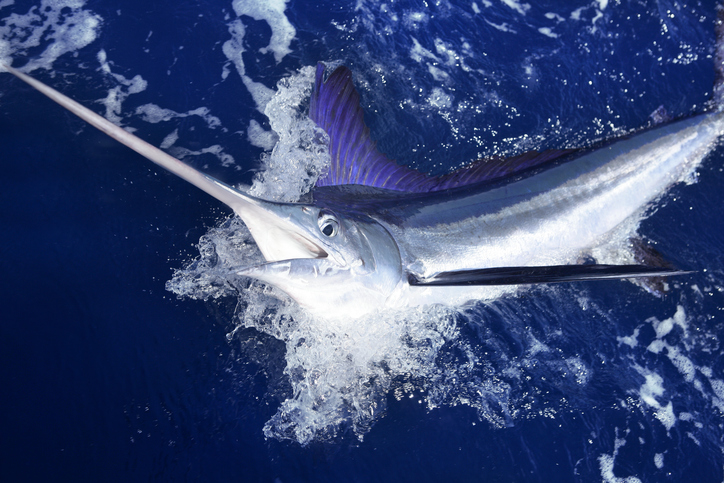 The blue marlin is one of the most coveted fishing pursuits in the world. What’s the premier destination for blue marlin? Kona, of course – where more blue marlin weighing more than 1,000 pounds have been recorded than anywhere else. Our boat, the Sea Strike, even holds the 50-lb record for a 1,166 pound blue marlin. Some commercially caught blue marlin near Hawaii have exceeded 2,000 pounds.

The spear on a blue marlin’s nose isn’t just for show. Blue marlins are fast predators and swim quickly through schools of fish. Those hit by its spear are often stunned, allowing the marlin to circle back and eat these fish.

They typically remain near the surface where the temperature is higher. This is better suited for the blue marlin’s big body. They’ll dive in order to hunt, often for squid and other creatures that rarely make it toward the surface. Blue marlin are happy to eat tuna and mackerel, but their diet isn’t limited to fish. Blue marlin typically count sharks as their only predators. Great whites and mako sharks will often seize upon a blue marlin from the deep.

The Joy of a Blue Marlin Catch

You can always keep your blue marlin and eat it or make a trophy of it. Also note that blue marlin catch and release is gaining in popularity, in part to keep the numbers of the beautiful fish up (blue marlin are classified as threatened). You still get the challenge and adventure of landing a gigantic blue marlin, and you get to release your foe to make more blue marlin that you and your children can come back to battle another day.

The joy of deep sea fishing for blue marlin near Hawaii is that they’re such a challenge for anyone, no matter how experienced you are. You’re never guaranteed of landing them, and you have to use all your expertise to do so. Nonetheless, they’re good for those who are learning, too, and an experienced crew behind you always gives you a good shot.