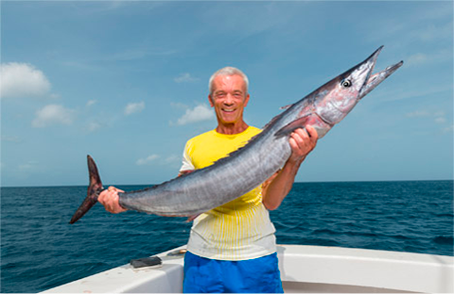 If you’re looking for a cheetah in the water to try to keep pace with, look no further than the wahoo. Here as deep sea fishers in Hawaii, we call this deep sea quarry the ono. They don’t tend to school, so they’re a good opportunity to put our best baiting tactics to the test. Even when you do find one, an ono will take off up to 60 mph with incredible acceleration when it feels threatened.

They’re a fight and a 20-pound ono will give you a serious yank if you don’t handle them right. A 100 pound “alligator” ono revving through his gears can pull you straight out of the boat if you don’t get yourself set quickly. The world records for an ono are 8 ft., 2 in long, and 184 pounds heavy. They’ll fight, they’ve got a stunning change of direction, they’ll dive down to 60 fathoms, and they’ll run you ragged if you aren’t careful with them.

Even when you get a gaff in them, they’ll still fight you every step of the way. If you thought reeling them in was difficult, you’re only halfway finished. They’re most dangerous when you’re at your most tired. They’ve got teeth like knives and jaws that will snap closed, so you’ve got to be careful getting them on deck, too. They’re good at jumping off the gaff, and if they do, they’ll thrash your legs out from under you and aim for a retaliatory bite. They don’t relent. The ono’s so ferocious that some anglers don’t even take the hook out until they’re back dockside.

Ono means “good to eat” in Hawaiian, but it doesn’t really specify who’s doing the eating – angler or fish. They are tasty, like a milder mackerel, but anglers are more likely to call them, “Oh no,” to their faces. They’re a year-round fish here in Hawaii, offering a unique challenge for anglers who want a worthy adversary.

If you think you’re ready, ono are a match for any deep-sea fishers in Hawaii wanting a hardy new challenge.